Xerox PARC: A nod to the mind behind the GUI, Ethernet, laser printing and more

While we typically associate technological advancements with the companies that successfully bring them to market, there are often some underrated organizations working hard behind the curtain. In many cases over the past 40 years, the Xerox Palo Alto Research Center (now PARC) has been this hidden player, inventing many of today’s ubiquitous technologies or refining them from abstract concepts.

Started as a development arm of Xerox Corporation in 1970, PARC has been instrumental in the engineering of laser printing and many technologies that make up the personal computer, including the graphical user interface (GUI) used in the Xerox 8010 Star. Information System in 1981, followed by the Apple Lisa. The team included many of the world’s best computer scientists, including former employees of the Stanford Research Institute. 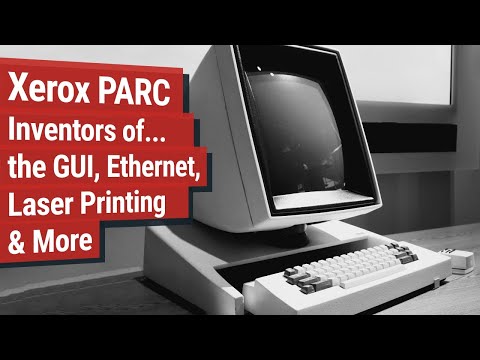 Despite its extensive contributions to the industry, the group has come under fire for not capitalizing on its many innovations. While some of our older readers may be familiar with the prolific Palo Alto Research Center, we think its accomplishments have largely escaped the younger crowd. We would like to take a few and give credit where credit is due.

The networking platform that ships with virtually all modern computers originated at PARC around 1973 with Robert Metcalfe and three of his colleagues credited as inventors. An early experimental version of Ethernet ran at 2.94 Mb / s and was described in a 1976 article co-authored by Metcalfe titled “Ethernet: Distributed Packet Switching for Local Computer Networks” (PDF). In 1979, Metcalfe convinced Xerox, Intel and Digital Equipment Corporation to promote 10Mbps Ethernet through the “DIX” standard.

Early Ethernet used coaxial cables, but they were eventually abandoned in favor of twisted pair and fiber optic cables. Countless other networking-related advancements took place in the creation and enhancement of Ethernet, including the PARC Universal Packet (PUP), a suite of network interconnection protocols that influenced TCP’s early work. / IP and served as the cornerstone of Xerox’s latest XNS protocols. Additionally, PUP was a central part of PARC’s prophetic “office of the future” concept (check out this first announcement).

One might wonder who developed the first mouse, but it wasn’t PARC. Yeah, yeah, that’s supposed to be the topic of this article, but read on. A mouse-like bowling ball craft was created as part of a secret military project in 1952, while Stanford’s Douglas Engelbart independently produced a wheel mouse in the early 1960s. Engelbart did not plan to demonstrate its device in 1968, the German company Telefunken revealed a ball mouse – although it barely resembles modern designs.

Bill English, who helped Engelbart with his original concept, later built the “Alto” ball mouse we are most familiar with while working for Xerox PARC in 1972. Its rectangular shape, button placement and wire protruding from the top set the standard we always follow. today. The device was created for PARC’s first “Alto” machine, which was arguably the first modern personal computer with a mouse-driven graphical interface, but it was never marketed. Richard Lyon of PARC then built the first optical mouse in 1981.

Having a point-and-click interface is useless if you can’t, well, point and click. PARC must have pioneered much of the graphical environment that we take for granted, even inventing the “desktop” metaphor (conceptually, Engelbart also beat PARC here). The group’s first GUI featured icons, context menus, check boxes, and mouse-controlled overlay windows. This opened the door for some innovative software, including most of the early WYSIWYG applications – a luxury at the time, to say the least.

Among these new applications was Bravo, the first WYSIWYG word processor (which laid the foundation for MS Word). PARC also developed the first integrated circuit editor WYSIWYG, the vector graphics editor Sil, the Markup bitmap editor (a paint program), as well as programming languages ​​like Interlisp, InterPress and Smalltalk, the latter having influenced C ++, Objective C, CLOS. , Java and more. In the late 1970s, PARC invented language technologies for spell checking and created one of the first networked multiplayer games, Alto Trek.

Invented by Gary Starkweather at Xerox’s Webster Research Center in 1969, the first prototype laser printer was made by modifying a xerographic copier. Although it was technically born just before the founding of PARC, Starkweather worked with the Palo Alto team over the next two years to refine its original design. The first business unit was introduced in 1975 (the IBM 3800), but it wasn’t until 1981 that the market received its first desktop laser printer, the $ 17,000 Xerox Star 8010.

HP’s 71 lb LaserJet hit the mainstream market in 1984 and printed at a whopping 300 dpi / 8 ppm. It was quickly followed by competing devices from Brother, IBM, Apple and others, but even the first “mainstream” implementations were incredibly expensive by modern standards. The LaserJet sold for $ 3,500, or about $ 8,500 today. Laser printing became a multi-billion dollar business for Xerox, easily funding all of its other projects.

Most of the above technologies were present in PARC’s experimental Alto computer, but this system was not intended for prime time and was used primarily in-house until the 1970s. The Alto was extensively used. refined and marketed in 1981 when Xerox delivered its first office workstation, known as the Xerox Star or Xerox 8010 Information System. Intended to deliver on Xerox’s vision of the “office of the future”, it was marketed as part of a complete “personal desktop system” that included other workstations and file / print servers.

The Star itself sold for $ 16,000, but Xerox’s full desktop setup cost over $ 50,000. Not only was it expensive, but it was a completely closed system, which meant all hardware and software had to be built by Xerox. Only about 25,000 units have been sold and many view the Xerox Star as a business failure. Others argue that he was simply ahead of his time. A few years later, Apple released the Macintosh, which borrowed many concepts from PARC and is considered the first commercially successful PC with a graphical / mouse interface.

Thinking beyond the PC

Not only were Xerox’s Palo Alto group ahead of the curve with personal computers, they envisioned an era beyond the traditional PC nearly 30 years ago. PARC coined the term “ubiquitous computing” in 1988 to describe a future where technology takes center stage in our lives and people use mobile devices to seamlessly access resources and control environments. Sound familiar to you? PARC developed some of the first working examples of the “pads” and “tabs” that flood the computer scene today.

The PARCTab prototype was built in 1991 and measured 9x11x1 inches, weighed five pounds, had a Motorola processor, 4MB of RAM, a stylus interface, keyboard, and built-in mic. It also had near-field communication technology, aka NFC, which is widely used today. A similar device, called the PARCTab, was a palm-sized computer that allowed researchers to access the internet, read their email, check the weather, and many other basic handset functions. Further, Alan Kay of PARC described the “Dynabook” in 1972.

With so many brilliant minds seemingly exploring every facet of IT, there’s no way to list all of their accomplishments. Along with all of the above, the group has also created or greatly contributed to:

While PARC may never become a household name, there’s no denying that it has been a driving force in the computer industry for decades. When it was created, the research organization was responsible for designing an “office of the future”. By all accounts, he accomplished this mission and more.

The division was split in 2002 but remains an independent subsidiary of Xerox. Many former PARC employees have started their own businesses, including Adobe, 3Com (acquired by HP in 2010) and Spectra Diode. Three of its eminent researchers are also laureates of the Turing Prize, the “Nobel Prize for Computing”.

PARC continues to tinker with cutting-edge technologies, from artificial intelligence (AI) and human-machine collaboration to the Internet of Things, digital manufacturing and the digital workplace.

Previous articleBose QuietComfort 45 vs Sony WH-1000XM4: a battle between two of the best noise canceling headphones
Next articleBest WordPress themes of 2021: paid, free and for business