Whenever I visit smartphone stores to observe people’s buying behavior, it’s common to see them all making sure the phone covers all the bases. Some buyers specifically tell the retailer what they are looking for in a phone, others give a rough outline of their needs.

It’s a bit difficult to understand the psychology of a consumer and exploit all the possible features of a phone while keeping the price affordable to a large base of consumers. The new Galaxy M52 is a product that shows how the Galaxy M series has evolved since its inception, but it looks like a phone that belongs to today’s landscape. Maybe the idea has always been to generalize it and bring the best features and the best possible value to consumers.

I used the Galaxy M52 for almost a week and here is my experience with a phone that I hope will be a popular device in the mid-range smartphone segment. 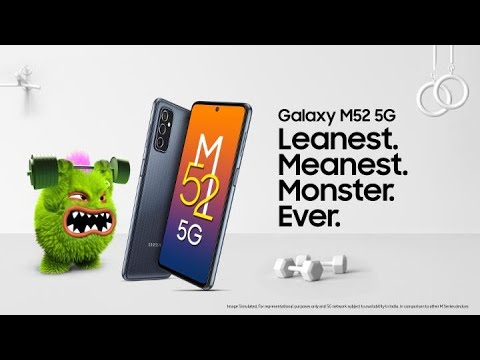 The Galaxy M52 has the DNA of previous generation M-series Galaxy phones, but it looks fresh to me. It comes in “Blazing Black” and “Ice Blue” and although the plastic back with thin stripes looks good, it quickly accumulates fingerprints and smudges.

The M52, not to be confused with the Galaxy A52, is a tall, slim phone. At 7.4mm and 173 grams, it is lighter considering that the phone has a 6.7 inch screen. I don’t mind using a big phone, but now that travel is cut off I would rather prefer a small phone as I recently switched to a tablet for watching movies at home. That said, the Galaxy M52 fits well in my pocket and isn’t uncomfortable to hold in my hands for longer.

The right side of the Galaxy M52 has a volume rocker and a power button that doubles as a fingerprint reader. At the bottom you’ll find the USB-C port and mono speakers. The left side of the phone has the SIM / microSD slot. Two missing features of the Galaxy M52 are the 3.5mm headphone jack and an IP67 rating.

You have the option to manually switch between the 60Hz and 120Hz refresh rates. (Image credit: Anuj Bhatia / Indian Express)

The Galaxy M52 is huge, with a screen size measuring 6.7 inches diagonally. It’s a 1080p AMOLED display with a 120Hz refresh rate that dominates the front of the phone. Maybe you don’t like carrying a huge phone around, but you can’t deny the display quality of the Galaxy M52. It’s a gorgeous display with vivid colors and inky blacks. The screen is bright enough and reading a newspaper article or replying to a WhatsApp message will not be a problem in direct sunlight.

Using the Galaxy M52, I felt like I was using a mini tablet. It’s great to have a device that fits in your pocket and is good for gaming and streaming content on the go. The high refresh rate display at this price is excellent. The refresh rate makes it easier to play games and, in particular, to digitize your social networks and web pages. Meanwhile, the built-in mono speakers are great for watching YouTube videos, but I miss the stereo speakers terribly.

The Galaxy M52 runs on a Qualcomm Snapdragon 778G processor with 6 or 8 GB of RAM and 128 GB of storage. You can add up to 1TB of external storage with a microSD card. While using the phone, I didn’t encounter any issues when opening apps and navigating between screens. Everything is going well, from editing a video to games like Pokemon Unite and Dragonball Legends. The 120Hz display on top of that really makes the user interface browsing experience smooth and fast. Samsung’s One UI 3.1 software works well on Android 11, and I have no complaints except that there are too many preloaded third-party apps. Facebook, Dailyhunt, PhonePe, Josh, Snapchat, Byju’s… the list goes on. There are also ads that appear frequently on the launch screen which is annoying and frustrating.

The phone comes with a 5,000mAh battery which is more than enough for an average user. In fact, in my testing the M52 lasted over 48 hours between charges. That means the phone lasts for two full days, propelling the Galaxy M52 5G into the coveted two-day battery club. It comes with a 15W charger in the box and supports 25W fast charging with an optional AC adapter.

The Galaxy M52’s triple-camera setup is familiar, with a 64 MP main rear camera, complemented by 12 MP and 5 MP ultra-wide macro cameras. I won’t say that you will be surprised at the photos it is able to take but I have to say that the quality of the photos is not bad.
In daylight, I was able to take pictures in great detail with good colors and high dynamic range.

The colors were oversaturated and I was not surprised. Some shots went really well, but I wasn’t too convinced with the Galaxy M52’s portrait mode – it’s hit or miss. The ultra-wide lens works best with good lighting. The phone is also good for taking pictures at night, but it loses quality and adds noise. The macro camera is average, to say the least. The 32MP selfie camera performs well, especially in daylight shots. In low light, however, the image quality is drastically reduced.

Samsung Galaxy M52 review: should you buy it?

I love the Galaxy M52, and the reason has to do with how Samsung brings high-end features to mid-range phones. From its 120 Hz AMOLED display, its fast Snapdragon 778G processor to its 5G connectivity, the Galaxy M52 has many features to please the greatest number. It looks great and performs well above expectations. If you’re looking for a new phone, the Galaxy M52 is definitely worth a look.