In a word: The Nintendo Switch OLED model didn’t launch until last Friday, but hardware detectives have already done some teardowns and discovered something interesting. The new device’s docking station appears to be capable of producing 4K output at 60 frames per second.

The Nintendo Prime YouTube channel reviewed the new OLED Switch dock and noticed that it came with an HDMI 2.0 cable, unlike the original Switch, which came with HDMI 1.4. Both standards are capable of 4K transfers, but the slower HDMI 1.4 can only achieve 4K at 30 fps.

This change isn’t solid proof that the new dock can output 4K / 60fps, but it did make Nintendo Prime curious enough to take the unit apart and look at the internals (below). They concluded that the video output from the docking station is “HDMI 2.0 compatible”. 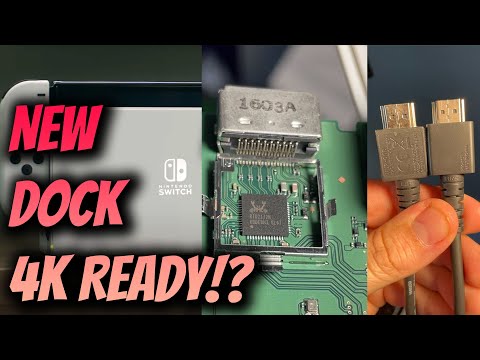 Twitter user @KawlunDram identified the chipset as Realtek RTD2172N KBDQH1, which is listed as a “4K UHD Multimedia SoC”. He notes that this matches information pulled from a firmware update earlier this year. So for all intents and purposes, the Switch OLED Dock is 4K / 60fps compatible.

As for the capabilities of the handheld, it uses a Soc Tegra X1, which, as Nvidia points out, is quite capable of 4K at 60 frames per second. That said, this is unlikely to happen. The original and Switch Lite use the same SoC but lack the processing power needed for 4K gaming. As we know, the new Switch isn’t much of an upgrade other than the OLED display, so it performs as well as the previous models.

So why include an HDMI 2.0 output on the dock if the Switch can’t handle 4k output? That’s a good question with no solid answer. One theory is that Nintendo is setting the stage for the long-rumored Switch Pro. For two years in a row, analysts have been saying a Switch Pro 4K is coming.

Hi players. Nothing ever gets done right on the internet, so I decided to dig myself

The DP2HDMI chip of the OLED switch dock is an RTD2172N KBDQH1 which seems to correspond to what @SciresM Switch OS datamined in January pic.twitter.com/6i2Z8zei0W

Last year, Dr Serkan Toto from Kantan Games said, “There is absolutely no doubt in my mind that Nintendo will be releasing a ‘Switch Pro’ in 2020, I guess it’s $ 399.”

Of course, that never happened. Earlier this year, Toto doubled down, saying the 4K-capable Switch Pro would launch before Nintendo’s fiscal year-end. Nintendo FY2021 ends March 31, 2022, so we still have some time for this prediction to materialize.

Bloomberg also reported last month that 11 game developers, including someone from Zynga, came forward saying Nintendo has given them tools to start producing 4K Switch content. However, a 4K console is not expected to arrive until the end of 2022 “at the earliest”.

We also want to reiterate that, as we announced in July, we have no plans for a new model other than Nintendo Switch – OLED model, which will launch on October 8, 2021. (2/2)

However, don’t start holding your breath. Nintendo officially responded to Bloomberg’s report, categorically denying that it provided developers with 4K tools. He also reiterated his denial from July, saying he had no plans to make a Switch 4K console. After Nintendo refuted the story, a Zynga spokesperson told Blomberg that the information he got from his anonymous source was false.

Only one thing is certain: someone is lying. It’s the position of Nintendo and an official Zynga representative that no one is working on 4K Switch content. If this is true, we should believe that at least 11 people from 11 different developers came together to hatch a hoax saying they were using 4K Switch SDKs. I don’t know who to believe, but if I had to make a guess I would say we might see leaked footage of Nintendo Switch 4K Development Kits soon.

What to do if your Amazon Prime delivery is late

India’s leading market for game downloads in the world in September 2021: report