In context: Microsoft’s handy “Windows Subsystem for Linux” (WSL) tool has been available to some extent for years now. WSL allows users to run a full Linux environment of their choice – along with your favorite Linux utilities and software – directly in Windows. No need to worry about dual booting or setting up a resource-hungry virtual machine. Now, with the launch of Windows 11, hooking up the WSL has become easier and more accessible than ever.

To be clear, this was never a hard process, in itself; Microsoft maintains a set of easy-to-follow installation instructions in its WSL documentation. However, it required basic knowledge and familiarity with command lines, which the average user might not have. Granted, these users might prefer to stick with Windows instead of Linux, but the latter operating system is certainly gaining popularity in the mainstream world.

In all cases, the WSL application is available on Windows 11 and Windows 10 machines, although Microsoft has removed the latter from its official announcement. However, Windows 10 users will need to be running OS version 22000.0 or higher to use it. Notably, the non-Windows Store version supports versions of Windows 10 as old as 19041 (or that’s what Microsoft says). 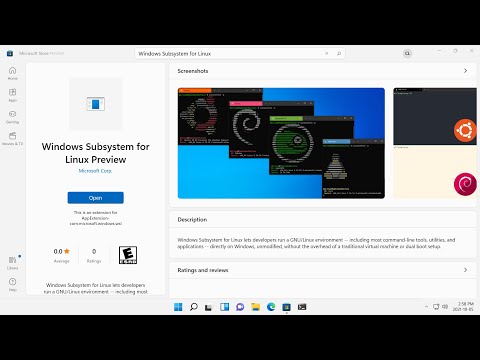 Here is a direct link to the Microsoft Store page for the WSL app. Its size is around 442MB, so it won’t take up too much space on your PC. It is currently considered a “Preview”, so be prepared for any bugs or missing features. That said, assuming it’s WSL 2.0, it should be a pretty decent experience out of the box.

Hopefully most of you won’t have any issues, but if so, be sure to let us know in the comments below.

As a final point of clarification, existing WSL users are not required to download MS Store version to continue receiving updates. You can still get them the old-fashioned way, but Microsoft would like you to make the transition eventually, as it hopes to make the Store app the “best way to install and use” WSL in the long run.

Netflix’s First Cowboy Bebop Trailer Should Take Your Doubts Out

HUNTERS BAR “Monster Hunter Bar WEST” will be held for a limited time! | Famitsu.com with the latest information on games and...