Google could host its fall event on October 5: here’s everything we expect to see

Now that Apple has unveiled its new iPhone 13 series, the tech community has another major launch to look forward to, this time from the Android side. Since Google unveiled the new Pixel 6 series smartphones in early August, users have been waiting for the devices to launch commercially. Now it looks like we have a date.

Google apparently has an event planned for October 5, a screenshot of XDA Developer Mishaal Rahman. The screenshot shows an article now deleted by CNET who was talking about the upcoming event. However, the screenshot also suggests that the event could revolve around Google Nest, Travel, and Map products.

A number of reports on the Pixel 6 series have suggested a launch date towards the end of next month, with the nominees being October 19 and 27. So while Google might host an official event on October 5, the odds of the Pixel 6 and Pixel 6 Pro going live on that date seem slim for now.

The release_date string is empty on my other Pixel phones.

Looks like Google really wants to push users to update to a new version of GCam that they release on the day of the Pixel 6 series release. And if that’s correct, then that release date is October 27th.

A series of tweets from Rahman also suggest that October 27 may be the time we see Pixel phones live. Rumors also say that Google may announce its first foldable phone at the same event.

Google has already revealed what the new Pixel 6 Series phones will look like. That includes the new design, larger camera modules, and even a new Google-made Tensor chip powering the phones. Rumors have suggested that the regular Pixel 6 will have a 50MP main camera and a 12MP ultra-wide camera, while the Pro variant might feature a 48MP telephoto lens as well. 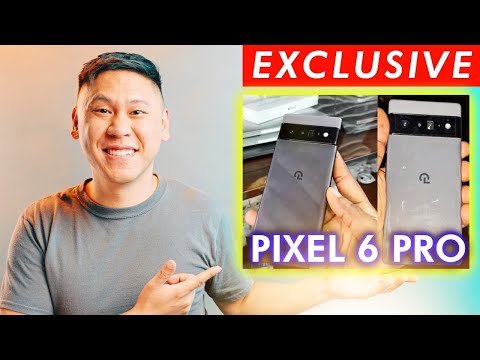 A recent video also shows us our first look at what looks like a prototype Pixel 6 Pro from all angles. YouTuber Mr. Brandon’s hands-on video (@thisistechtoday) highlights the thin edges and perforated cutout of the phone.

Previous articleNo there is no free live stream of UFC 266 – you have to pay
Next articleiPhone 13 Pro Max vs. Samsung Galaxy S21 Ultra: Which phone is best?