AMD has made several announcements of new platforms and chips as part of Ryzen’s five-year celebration. While Ryzen only launched on March 2, 2017, AMD is obviously counting the anniversary of its debut in December 2016 and kicking off the celebrations a few months earlier.

AMD Technical Marketing Director Robert Hallock sat down with John Taylor, AMD Marketing Director, for an in-depth conversation about Ryzen and the future of AMD. The conversation touched on a number of specific points regarding AMD’s upcoming product announcements and some general points worth discussing further. 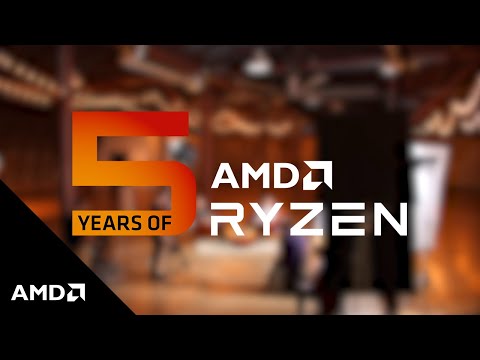 Hallock confirms in the video that AMD will launch two major products next year: an AM4-based refresh for Zen 3 with V-Cache and a new platform that supports features like DDR5 and PCI Express 5.0. Hallock specifically refuted rumors that AMD would stick to PCIe 4.0 for its AM5 platform. AMD will continue to focus on backward compatibility by supporting AM4 CPU coolers on the upcoming AM5 platform, so people who have invested in high-end Ryzen coolers won’t have to replace them when new processors will arrive.

The AM4 Ryzen processors with V-Cache slated for launch in early 2022 are likely analogous to the Ryzen 3000 XT series processors that AMD released a few months before the launch of the Ryzen 5000 family of processors. Hallock and Taylor reiterated it again. that V-Cache offers a targeted 15% upgrade in games. The benefits for other workloads have not been discussed, but a good number of applications should benefit from the larger L3 cache.

These processors will likely serve as the high-end swansong for the AM4 platform, and they will provide end users who have built AM4 platforms in recent years with a final processor upgrade if they want an improvement. performance without having to buy a new motherboard and RAM.

AMD also explained what Zen means for the company during its video, and how the company has designed its processors to deliver excellent performance and energy efficiency. In response to Intel’s upcoming Alder Lake processors, which take a hybrid approach that mixes small and large cores, Hallock said AMD doesn’t think it needs to go down that road.

“Every silicon company is thinking about what this next generation of energy efficiency looks like. Mixed cores are one approach, ”Hallock said. “The Android ecosystem took this a long time ago, but the way we plan to do it goes back to our roots… We have built a kernel that is physically much smaller than what other companies were building on x86 terrain. . When you combine that with process leadership, package leadership like chips or 3D V-Cache, when you add that with the new firmware work we’re doing, we can lead to much, much more power profiles. low than we are today. . Today we are the leader in energy efficiency. We can continue to do so.

AMD doesn’t claim it’ll ever build a hybrid processor, but the company doesn’t think it needs to do so just yet to compete with Intel. It may be fair. There’s a lot we don’t know about Alder Lake just yet, and even the desktop debut won’t tell us everything about how the laptop version performs. AMD will deliver its next Zen 4 on a 5nm process, compared to Alder Lake’s 10nm SuperFin process. The lithography gains aren’t what they used to be, but they’re still worth something.

There is an interesting fight brewing here between two different x86 design philosophies at the same time as x86 itself faces renewed competition from Apple. AMD is betting that its chip design philosophy, process node leadership, and the strength and flexibility of the Zen processor core can collectively outweigh the benefits Intel will get from specially designed high efficiency cores. Given the reality of semiconductor lead times, we’ll see Intel’s opening “argument” later this year, followed by AMD’s Zen 4 in 2022 – likely in the second half, if the company markets Zen 3 + V-Cache processors during the first part of the year.